The Jewish Cemetery in Bielsko Biala 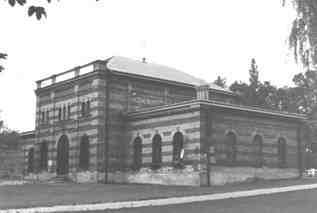 The Cemetery and Jewish Community

The historic Jewish cemetery in Bielsko-Biala on Cieszynska Street, has been in continuous use for more than 150 years, including the German occupation during World War II. In 1995, “Bear” – Historyczne Centrum Badawcze (Historical Research Center), at the request of the Jewish Denominational Community in Bielsko-Biala and the Irgun Yots’e Bielsko-Biala in Israel, undertook a comprehensive inventory of the cemetery. According to the most recent findings, published in his The Jewish Cemetery in Bielsko-Biala [Cmentarz Zydowski w Bielsku-Bialej] , it is estimated that between 3,500 and 3,600 people were laid to rest in the nearly six acres that constitute the cemetery grounds.

Four sources were used in creating the database, gravestones, vital records (death registrations), the Chevra Kadisha funeral register and death/funeral announcements from regional newspapers. The sources often used different spellings of the names. As a result, all spelling variations have been incorporated into the database.

The Bielsko cemetery, founded in 1849, is the only remaining Jewish cemetery in the city of Bielsko-Biala. A second Jewish cemetery, located in the then bordering town of Biala, was established concurrently with the formal creation of separate Jewish Denominational Communities in Bielsko and Biala. The Bielsko Jewish community was progressive and largely Reformed, while the Biala community was more Orthodox. As a consequence, the Biala cemetery, located on Wyzwolenia (Liberation) Street, conformed more to Orthodox requirements (e.g. separate sites for men and women) and was the final resting place for many of the Orthodox Jews from both communities. The Biala cemetery was liquidated by Polish authorities in 1966 over strong protests of the Jewish Community; very few of the graves were exhumed and transferred to the Bielsko cemetery. In all, about 2,000 people were buried in the Biala cemetery. After its liquidation, the government built a sporting-goods production facility on the site of the Jewish burial grounds.

The first Jews to acquire the right to reside in the area of Slask Cieszynski (Teschen Silesia) lived in Cieszyn, where in 1647 the first private Jewish cemetery, owned by Jakub Singer, was established. During the reign of Empress Maria Theresa, the cemetery was used by Jews living in nearby towns, including Bielsko. With the 1849 outbreak of the plague in the vicinity of Bielsko, followed by a ban on transporting corpses, Adolf Brüll purchased a plot of land for a Jewish cemetery in Aleksandrowice, Bielsko. A month later, the city was given permission for opening the two Jewish “houses of eternity.”

After the official registration of the Jewish Community in 1865, the ownership of the cemeteries was granted to the Bielitzer Israelitische Cultusgemeinde. The ceremonial building on the site of the Bielsko cemetery burned down in 1867 and a second building, which still stands today, was completed in 1885 by Karol Korn, a local Jewish architect who was later buried in the cemetery.

The Bielsko Hevra Kadisha (Burial Society), founded in 1902, administered the cemetery until 1932, at which time this responsibility was transferred to the Jewish Denominational Community. In 1972, the cemetery was taken over by the Polish government’s Treasury Department. It wasn‘t until 1997, following the passage of legislation in the Polish Parliament, that the Bielsko cemetery was returned to the Jewish Community.

World War II wreaked devastation upon the Jewish communities in Bielsko and Biala, as it did on Jewish communities throughout Europe. The synagogues in both Bielsko and Biala were destroyed, and the magnificent library and archive belonging to the Jewish Community was burned. Today, the only structural remnants of the Jewish Community, which played a significant part in the city’s development, are the pre-war building at 22 Mickiewicz Street and the cemetery with its ceremonial building.

The cemeteries survived the War, but they weren’t spared serious damage and loss. Many gravestones were stolen, especially those from the oldest sector, from family vaults, and from along the Aleja Zasluzonych (Avenue of the Righteous). Bielsko’s honored citizen Salomon Pollak, architect Karol Korn, the first Bielsko rabbis, Lazar Frankfurter and Lesser Wolf, bibliophile and collector Salomon Halberstam, whose fame spread all over Europe, city councilman Dr. Siegmund Markusfeld, cantor Ignacy Goldmann, Professor Michael Berkowicz – these and many other distinguished individuals had their gravestones stolen.

Possibly influenced by the Austrian culture of the period, bereaved Jewish families in Bielsko throughout the late nineteenth and early twentieth centuries often placed obelisks on the graves of their loved ones. Surprisingly, there are very few traditional matzevot – gravestones characteristic of the Orthodox Jewish communities. The most sought-after mason at the time was Salomon Leiser Wulkan.

The most frequently encountered decorative carvings in the Bielsko cemetery include the Star of David, palms, crowns, blessing hands, pitchers, or menorahs. This latter symbol occurs exclusively on the gravestones of women, who traditionally were the lighters of Shabbat candles.

The oldest gravestone in the Bielsko cemetery is the matzevah of a seventeen-year-old boy named Josef Neumann, who died on 16 Elul 5609 of the Hebrew calendar, or September 3, 1849. The two oldest recorded members of the Bielsko Jewish community were Salomon Hamburger and Benjamin Falek. Both lived to be 104 years of age and both are buried in Bielsko. Hamburger lived from 1771 to 1875 and Falek from 1896 to 2000.

Section A: Newest section (currently in use and well maintained). Section B: In use from the late 19th century up to ca 1920. Section C: Burials from 1900-20 (includes the wealthier members of the community). Section D: Children’s section (includes graves from the beginning to World War II). Section E: Graves of Jewish soldiers who died in World War I. Section F: Oldest section of the cemetery. Section G: Remains of the graves transferred from the former Biala cemetery.

Years of death in the indices are from 1849 to 1959, and thus provide 20th century genealogical information not otherwise available due to lack of – or inaccessibility to – death records.

For those who know of family buried in the cemetery, these indices will be a welcome short cut for finding graves and obtaining further information. For others who search the JRI-Poland database on a regular basis, there may be an unexpected surprise of finding family surnames and perhaps ancestors and relatives in the Bielsko-Biala Jewish Cemetery.

The indices to the matzevot in the Jewish Cemetery in have been integrated into the JRI-Poland database.

To narrow the search, enter “Bielsko-Biala” in the “Town” field on the JRI-Poland search page. If a match in the “Bielsko-Biala” Cemetery database is found, it will be identified in a separate table in the search results.

To request information on a particular grave or obtain photographs, fill out the linked Request for Information Form

“The Jews in Bielsko, Biala and Vicinity”, Janusz Spyra