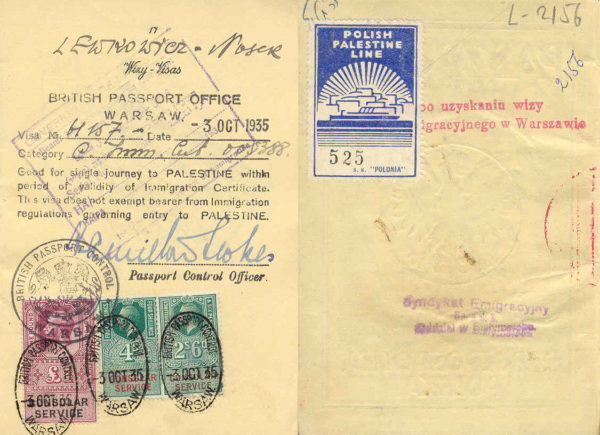 This article provides a summary of the Polish Aliyah Passports Project to index genealogical collections at the The Emanual Ringelbaum Jewish Historical Institute, Warsaw

In the 1930s as the shadow of history was lengthening over the Jews of Europe, several thousand Polish Jews managed to emigrate to what was then British Mandate Palestine.

The ‘Passports’ collection in the Archives of the Jewish Historical Institute of Poland (Warsaw) consists of 3,754 Polish passports issued primarily during the 1930s to Polish citizens going to what was then British Mandate Palestine.

In 2002, the data in this passport file was added to the Jewish Records Indexing-Poland database and is searchable by surname. We thank the generous contributors to JRI-Poland’s Aliyah Passport Project for helping the project become fully funded. We also express our appreciation to Michael Tobias and Howard Fink of JRI-Poland for their roles in formulating the data, and Anna Przybyszewska Drozd of the Jewish Historical Institute in Warsaw, and the Jewish Genealogical Society Inc. (New York) for their important roles in this historic project.

This was the first collection added to the JRI-Poland database that is not based on a specific town or other geographical area. Therefore, to find a specific surname from the Passport File, search the entire JRI-Poland database (All Gubernias/All Provinces). If you limit searches to a Gubernia, Province, Town, or distance from particular geographic coordinates, you will not retrieve Passport File results for your surname(s) of interest.

JRI-Poland developed a list of all 2600 SURNAMES in the Polish Passports file, correlating each surname to the towns of birth and residence associated with that SURNAME in the file. Reviewing this SURNAME/Town list may refresh your memory about the names of family members you may have forgotten.

The table above contains surnames extracted from the Polish Passports file, along with the towns of birth and residence that apply to these surnames.

Copies of these records may be ordered from the Jewish Historical Institute using the downloadable order form.

Background to the Aliyah Passport File

It appears that the rule in force at the time was that emigrating Polish citizens, upon receiving identity documents in their new homeland, were to turn in their Polish passports to the Polish Consulate at their destination. Invalidated passports were then sent by the local Polish Consulate back to the Foreign Ministry in Warsaw, where they were filed away in government archives. Some Polish Jewish emigrants to Palestine may have kept their passports, despite the regulations of the time, so if you do not find a particular name, it does not mean that individual did not emigrate.

At some point, the Polish Government decided that these "Palestine passports" are Jewish historical documents and the collection was transferred to the Jewish Historical Institute. Only recently were these passports finally sorted, alphabetized and computer indexed.

These passports not only bear photos and signatures of the bearers (in most cases), but the various official stamps and seals that appear inside trace the entire route taken by the emigrant and (on occasion) onward travels to other countries, providing precise dates for each leg of the journey.

Passports include date of birth, place of birth, last place of residence, occupation and civil status (single, married, etc.). The name of the child or the number of children appear in some instances.

This collection spans the years 1929 to 1939. Following the invasion of Poland in 1939, it was no longer possible for Polish consulates abroad (which continued to operate) to send used/expired passports back to Warsaw. As a result, the passports of later Polish immigrants to Palestine remained in Palestine.

Because Inter-war Poland included areas that are now part of Belarus, Lithuania and Ukraine, there are passports from towns such as Pinsk, Grodno, Kobryn, and Lida, now in Belarus, from Wilno and Ejszyszki, now in Lithuania, and from Lwow and Stanislawow (Ivano Frankovsk), now in Ukraine.

References to German towns as places of birth are typically for the children of Polish Jews living in Germany. They were considered subjects of Poland.

Questions can be directed to the project coordinator by using the contact button on the Project Page.